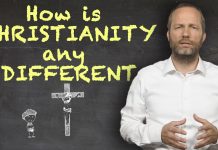 In this series we aim to show a similarity of construction between mathematics and religious belief, despite the fact that, at first glance, this link is counter-intuitive. We have shown that mathematics, like any other science, is based on a set of unprovable propositions, called axioms. On these propositions an entire logical system is built, in which true sentences lead to others of truthful value. In this episode, we plan to build an axiomatic system of religious faith, namely a set of propositions about God, which we will call The Axioms of Faith.
View moreClose

These axioms will become our starting point in building a system of statements that are logically linked to one another. I propose to you, as an axiomatic system, the following four sentences that define the Creator:

Like any other axiomatic system, the Axioms of Faith (do not bear proofs) OR CONSIDER cannot be proven, they are simply accepted by faith. However, as we have seen, any axiomatic proposition is based on the observation of nature, it is intuitive, and we will use the same method in assessing the axiomatic system that I am proposing to you.

Let’s take the first axiom: observing the complexity of nature, the coherence of the intrinsic information that coordinates each subsystem and the whole, common sense and intuition lead me to the idea that there is a superior force, an intelligence that structured it. The fact that nature is flooded with intelligent, structured information, which is by its nature immaterial, and therefore couldn’t have been created by matter, is probably the best intuitive proof that someone intelligent conceived it.

The second axiom: creation, especially that part of it which is superiorly organized, namely human, is profoundly relational. And relationship can only develop between persons, entities that have will, emotions, consciousness, and so on. So … How could something impersonal create persons, in other words how could something inferior create something superior? So intuitively, God has the characteristics of a person.

The third axiom: every Creator is distinct from his creation, He exists independently of it and existed before it. Thus, intuitively, God who created matter and time, according to Axiom 1, cannot be conditioned by it.

Regarding the last axiom, it is intuitive and observable in nature that any Creator loves his creation, and that closeness is directly proportional to the complexity of the creation and the effort involved in bringing it to existence. So, God, who created beings capable of loving their offspring, their creation, might not love His creation?

Obviously, these are just some of the intuitive arguments in favor of the axioms presented. But as we have mentioned already, by their very nature, axioms cannot be demonstrated, but can only accepted by faith, or rejected.

Before accepting them and building a system of religious belief on them, we will see what follows from their rejection. Similarly to Euclid’s geometry, there were voices that, consciously or unconsciously, denied the validity of these axioms, leading to various religious systems, which we will briefly explore in the next episode.